Coca-Cola Beverages Ukraine plant in Kiev Oblast is one of the largest Coca-Cola plants in Europe, and the leader in the production of non-alcoholic beverages in Ukraine. The plant produces world-famous carbonated drinks Coca-Cola, Sprite, Fanta; juices and nectars Rich, BotaniQ, Dobriy; BonAqua water, Nestea iced tea. Coca-Cola Company strictly follows environmental standards throughout the entire world, so it’s no surprise that the Coca-Cola plant was one of the first enterprises that introduced environmentally friendly LED lighting. Our Company acted as the general contractor in the project of complex modernization of the lighting system, and successfully completed the project in 2013. 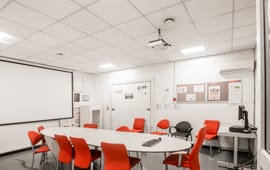